The sixth installment of what detemines the location of a capital: the case study of Cairo, Egypt. 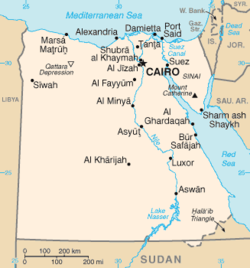 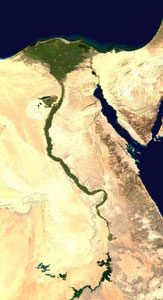 As it is well known to many, Egypt has a long history from the times of the Pharaohs to the Greco-Roman-Byzantine periods to Moslem dynasties, spanning astonishingly more than 5,000 years. So, it is no wonder that Egypt’s capital city moved from one place to another from era to era, always adhering to places along the Nile, the longest river in the world. From here, we would like to understand what prompted the Egyptian rulers to decide upon the location of their capitals.

Let’s first of all look at Egypt from above (for example take any one of the domestic flights from Cairo), which will show you the landscape of Egypt in the most defining way that life exists only along the Nile (actually, a green belt a few kilometers wide running from the Upper Nile to the Lower Nile and then to the Nile Delta area before draining into the Mediterranean Sea). The remaining vast expanse of Egypt is nothing but uninhabitable deserts. So, the ancient Greek historian, Herodotus, put it so appropriately that “Egypt was the gift of the Nile.”

The first unified Egypt (unifying Upper and Lower Egypt) set up its capital in Memphis, which is located some 27 km south of present Cairo on the west bank of the Nile. Memphis (incidentally the city of Memphis along the Mississippi in the U.S. adopted its name from Egypt) remained the capital of Egypt for nearly 1,000 years from the Early Dynastic period (ca. 3100 – 2686 BC) to the Old Kingdom (ca.2686 – 2181 BC). Memphis happened to be geopolitically well positioned at the mouth of the Nile Delta, which is one of the world’s largest deltas, being extremely fertile and extending more than 240 km along the shore of the Mediterranean.

A strong Pharaoh founded the Middle Kingdom (ca. 2055 – 1650 BC) and he set up a new capital in Thebes (near present Luxor) in the Upper Nile, where he happened to come from. Thebes is located about 800 km from the Mediterranean (670 km south of Cairo). Thebes remained the capital of the country for nearly 1,000 years during the Middle Kingdom and the New Kingdom (ca. 1570 –1069 BC)

Then, Egypt became part of the Greco-Roman-Byzantine Empires (ca. 30 BC –641 AD). Alexander the Great conquered Egypt and he set up a new capital, Alexandria, in the Nile Delta and on the shore of the Mediterranean. The location of the capital was probably decided by the Greeks who prioritized sea access linking with their homelands. In the 7th Century, the Moslems swiftly took over Egypt from the Byzantine forces and they set up their capital in a place where a Roman garrison used to be stationed, which eventually became Cairo.

So, looking back at Egypt’s history, we can notice that its capital cities changed from Memphis to Thebes, to Alexandria and finally to Cairo; it is quite obvious that the mighty rulers who founded their own dynasties decided upon the location of their capitals based on their preferences. But from a geographical perspective, all the Egyptian capitals, past and present, were established along the Nile.

Lastly, I would like to mention my own experience when I visited Egypt, more than 30 years or so ago. I was struck by the astonishingly meticulous, elaborate, and beautiful art works of buried treasures from the tomb of Tutankhamen (circa 1333 – 1324 BC), which were found in Luxor and now are permanently exhibited at the Museum of Cairo. Based on this experience, I have become, to a certain extent, a believer of the theory that aliens from outer space had created the ancient Egyptian civilization.