Hafez, detail of an illumination in a Persian manuscript of the Divan of Hafez, 18th Century

In the mid 1990s, I visited Shiraz, one of the major cities in Iran about 700 km south of the capital, Tehran, on a business trip for a telecommunications project. Shiraz has a population of over 1 million, and, like other big Iranian cities, is located on plateaus about 1,400 meters above sea level. Because of the mild climate, Shiraz produces citrus fruits, cotton, rice, and flowers; also it happens to be an important industrial hub for electronic products as well as the location of an oil refinery.

One day, I went to see the tomb of Hafez who was born and lived all his life in Shiraz. There, I was surprised to find a huge book of Hafez’s poems, each one of which was shown in several different languages including Japanese. Even more astonishing was that– I had no idea about his poems before the visit – some of the poems depicted wine, love, and simply put a lively or secular social life.

Then I asked myself: “How did the poet manage to make the prolific works (said to be more than 500), in the 14th Century Muslim world?” In order to find a clue, let’s take a quick review of history. First of all, we come to the “Islamic Golden Age” during the Abbasid Caliphate from the 8th to 13th Century. At its zenith, the Caliphate stretched from Pakistan in the east to the Middle East proper, extended to northern Africa, and to Spain in the west.

Thanks to a strong leadership of successive Caliphs, its capital Bagdad became the center for scientific, philosophical, medical, and educational activities based upon Ancient Greek, Roman, Egyptian, Persian, Indian (the decimal numeral system), and lastly Chinese (paper making) learning. It is interesting to know that the Persians played an important role for the Caliphate as a group of competent bureaucrats.

Hafez lived in a different world, but the legacy of revering scholars must have ensued. Now, let me show you one of his poems, which is appropriately entitled: “The Subject Tonight is Love”.

The subject tonight is love

And for tomorrow night as well,

As a matter of fact

I know of no better topic

For us to discuss

Hafez’s poems are so loved by the Iranians, it is said that every family has a collection of his poems, if not the Koran.

There is a world heritage site about 70 km from Shiraz. It is Persepolis, now the ruins of the once glorious capital of the Archaemenid Empire, which was obliterated by Alexander the Great in 331 BC. Incidentally, on my way back to Tehran, I had no choice but to take a long-distance taxi because I could not get an airplane ticket due to a chaotic festival season. Well, it took more than 13 hours to cover a distance of 700 km! 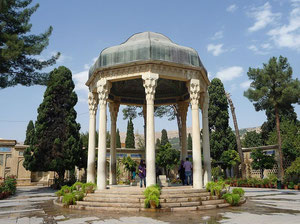 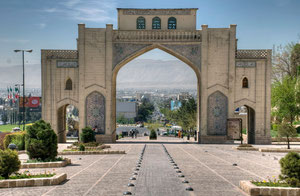