Jordan, a country standing at a crossroads in the Middle East 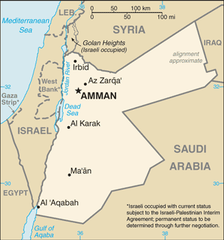 In the late 70s, I lived in Amman, the capital of Jordan, for two years, as a project officer for implementing national telecommunications networks. Jordan is a small country (about 89 thousand square km) which is roughly as large as Portugal with a population of 6.5 million. Ever since it gained its independence from the British Crown in 1946, the country has been at a crossroads on the Palestine issue. Jordan lies in a geopolitically vulnerable location in the Middle East, facing Israel and Palestine to the west, Syria to the north, Iraq to the north-east and Saudi Arabia to the south.

Based on my own experience, I would like to take you through Jordan, which abounds with a rich historical and cultural heritage, from north to south. To start with: What is your image of Jordan? Perhaps, you would mention key words like: desert, oil, hot climate etc. You might also add Dead Sea or Petra if you are more familiar with the country. Let me dispel certain illusions.

Jordan is not an oil producing country for one; although, they have now managed to produce natural gas to meet about 10% of their domestic needs. Of course, the climate varies according to where the cities are located but in Amman (about 800 meters above sea level) it gets quite cold during winter, sometimes even snowing (my apartment in Amman was well equipped with a central heating system, but surprisingly no air conditioning); in summer, it gets hot and dry during the day, but it becomes cool at night. The country is predominantly dry and there are deserts, yes, but to me the landscape of Jordan, with orchards and olive trees here and there, resembles more a typical Mediterranean country.

So, we will first visit the ruins of the ancient Greco-Roman city called Jerash, which lies some 48 km north of Amman. The ancient city had remained buried in soil for centuries until excavated by a German orientalist in 1806. The ruins consist of two large temples, a long colonnaded street, two theaters, an oval forum, and two public baths, amongst others. Ancient Jerash happened to be the birth place of the famed mathematician, Nicomachus (c.60 – c.120 AD) 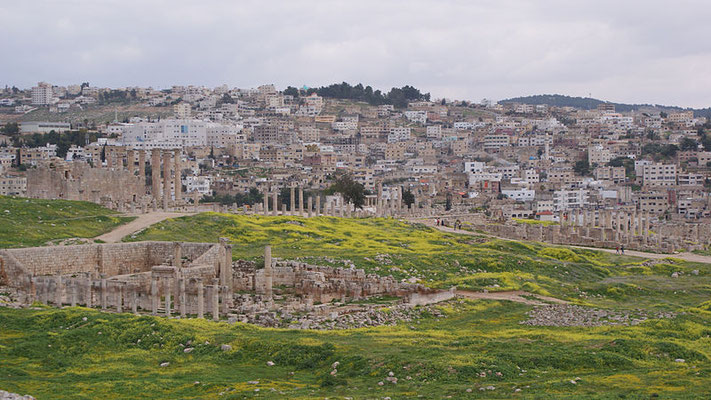 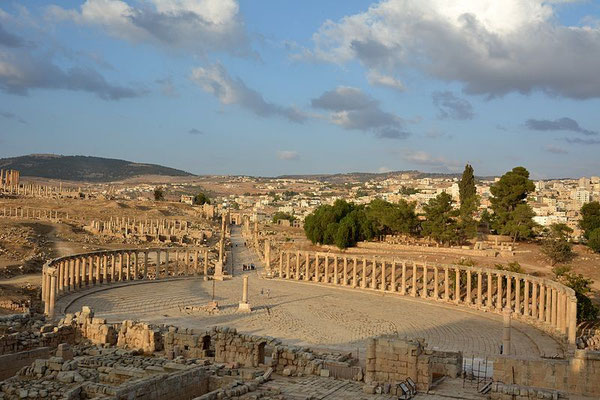 background) cities of Jerash. In spring, the surrounding

Here we are in Jordan’s capital, Amman with the population of 2.8 million (as of 2010). It is said that the city is one of the oldest continuously inhabited cities in the world. During the Macedonian era, Amman was called Philadelphia (incidentally, one of the Jordanian packs of cigarettes is so named). In the Othman period, Hejaz railway was built to link Damascus (Syria) and Medina (Saudi Arabia), making Amman once again an important city along the railway. 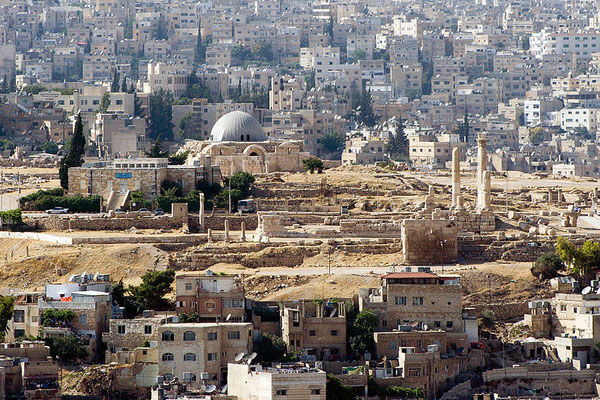 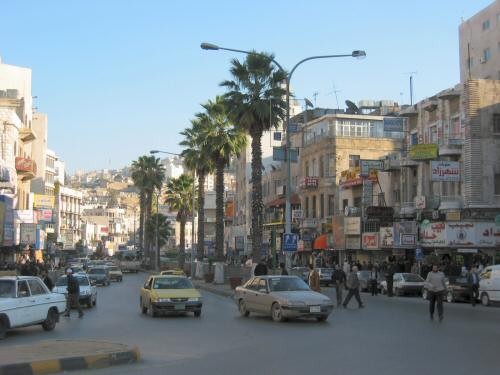 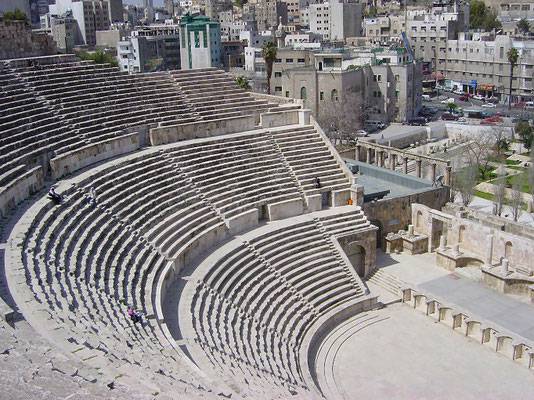 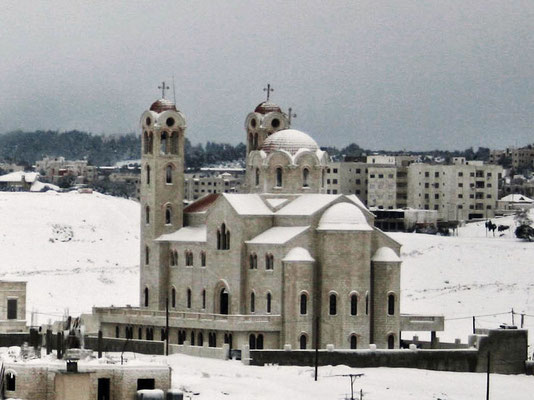 Then we proceed to Karak, which is about 140 km south of Amman, where you can visit the ruins of a Crusaders’ castle built in the 12th Century. The castle overlooks the Dead Sea and is only 80 km away from Jerusalem. The famous Arab physician and surgeon of the medieval period, named Ibn Al-Quff was born in Karak. The Crusaders at Karak were defeated by Saladin’s army in 1188. 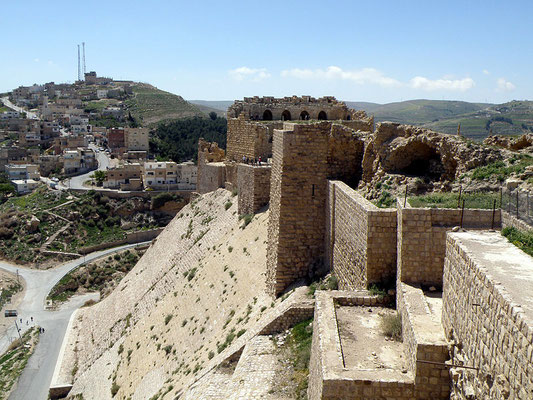 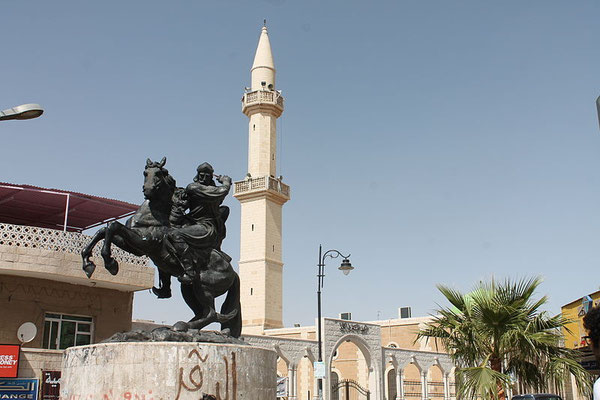 From Amman, it takes just less than one hour by car to reach the Dead Sea, which is famous for being the world’s lowest point, 394 meters below sea level, and one of the most saline lakes, 34.2% salinity.  (I tasted the water myself; it’s not salty, but bitter!) It is a well known fact that the water level of the lake is dangerously receding (something like 1 meter per year), because of the declining water inflow from the Jordan River, which cannot off-set the evaporation of the lake. In order to save the Dead Sea, there are a number of plans, including drawing sea water from the Red Sea by installing a duct or canal. 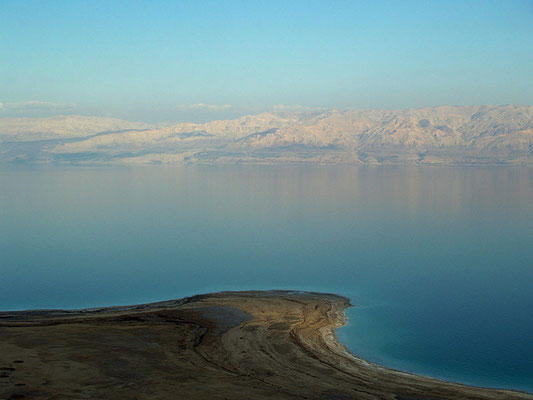 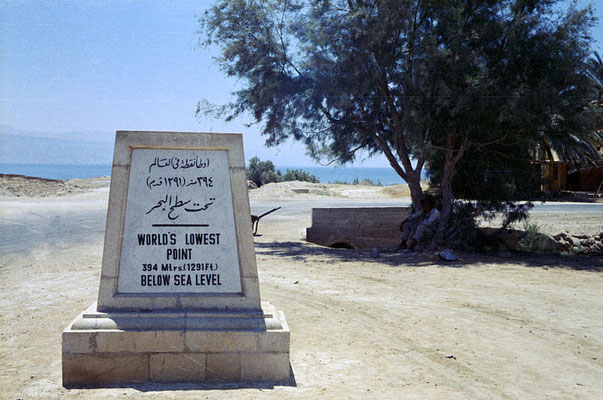 plateau from Israel (The border between the two           point on earth, 394 meters below sea level

Further south of Karak, you will come to a world heritage site called Wadi Rum, also known as the Valley of the Moon. Do you know that some splendid scenes of Laurence of Arabia were actually shot there? When I visited Wadi Rum, I was struck by the complete silence right in the middle of the desert; it seemed like any sound whether from nature or beast was immediately absorbed into the surrounding sand and rocks. 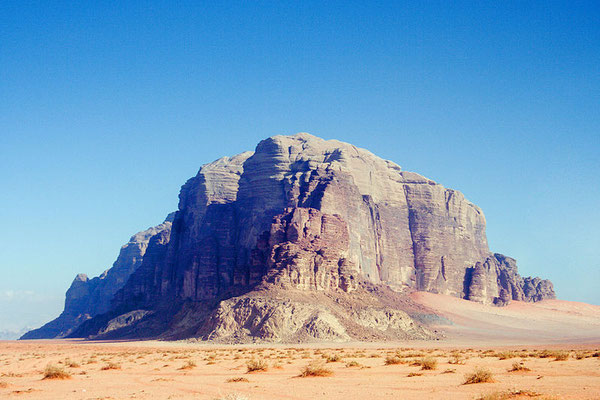 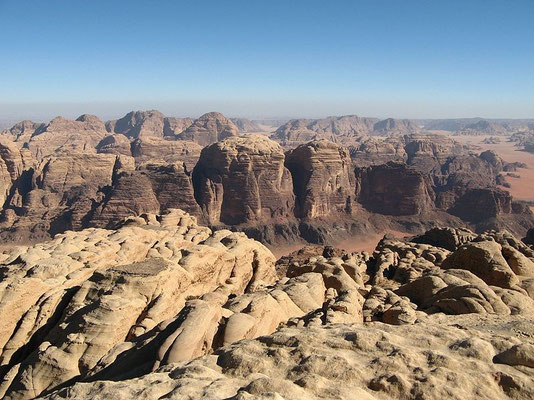 Then you will hit Petra, another world heritage site, as you go further south. Petra is famous for its rock-cut architecture and water conduit systems; it was the capital of the Nabateans from 1st Century BC. The city flourished as an important caravan trading center. Petra was rediscovered in 1812 by a Swiss explorer. 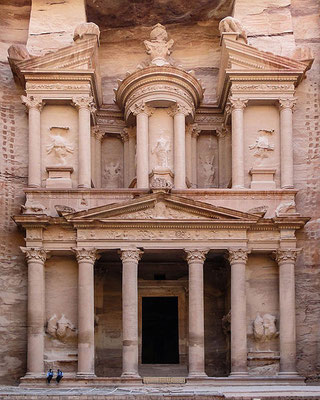 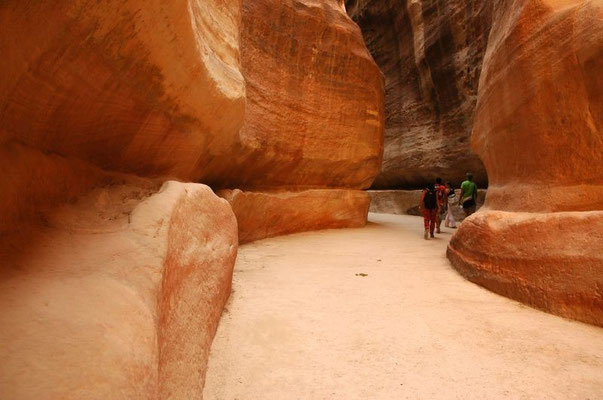 Lastly, we come to Aqaba, which is Jordan’s only sea port facing the Red Sea. There are daily domestic flights between Amman and Aqaba. For our telecommunications project, equipment and materials in wooden crates from Japan were off-loaded at the Aqaba port, and then after customs clearance they were distributed by trucks to different job sites in Jerash, Amman, Karak and Aqaba for installation and testing. 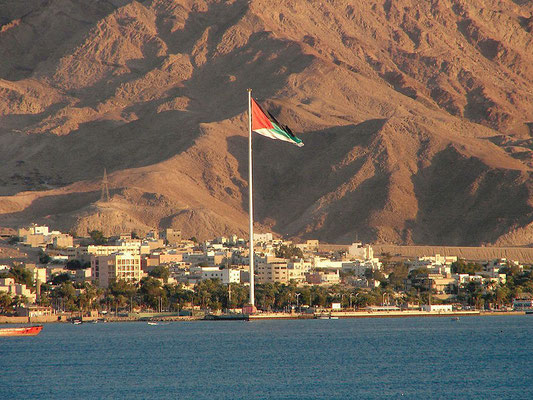 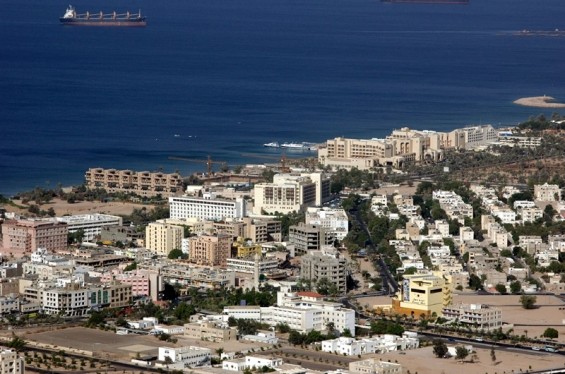 Aqaba as seen from Eilat, a neighboring sea port

I hope this has been a good glimpse of Jordan for you and how attractive it is. To end my blog, I would like to quote an immortal message from King Hussein (1935-1999) regarding the Palestine issue.

“It would behoove the world to become used to this fact: that without a just solution to the Palestine tragedy, there can be no stable peace in the Middle East.”