This photo shows the surface of the roof on a sunny day. Air underneath the tin roof is heated and then becomes hotter under the upper glass roof.

Not many people know the existence of the passive solar heating system. What kind of system is it? What do you mean by a passive system? Well, let me try to explain the system based on the one that was installed 15 years ago at my house.

Simply put, the system collects hot air from the roof, and uses it for heating. Actually, the system is composed of three sub-systems as explained one by one here. First, how to collect hot air? The roof (facing the sun) is made in such a way that it lets air flow right underneath its surface; so as air gets heated by the sunshine it flows upwards becoming hotter and hotter along the way (reaching around 80 degrees Centigrade even in November). This hot air when collected is blown through a duct to downstairs by an electric fan.

Second, the hot air will be used to heat the concrete foundation under the entire first floor. Why? So this base concrete now acts as heat storage during the day as well as at night. Third, the system uses a simple heating mechanism of air outlets that are located on the floor. This works during the daytime. At night? The heat storage also functions as the source of “mild” floor heating that will be effective throughout the night.

All in all, the solar heating system is a simple and environmentally friendly way of utilizing solar energy; thus it is called a passive system. Is it warm enough? Of course, it all depends on the sun. Yes, especially during a sunny day, sometimes I even have to open the window because it gets too warm inside. It’s OK at night because of a mild floor heating system. But on a cold cloudy day, it is different: you need an auxiliary heating system; at my place I use a Delonghi oil heater.

So, it’s not a “super” heating system, but still I can feel and appreciate the benefit of solar energy. Especially in the summer, the passive solar system is beneficial for us in that it is set to make more than 300 liters of hot water every day, more than enough to fill the bathtub and greatly cutting our gas bill. How marvelous it is!

------ Hot air is blown downstairs through this duct

---In the summer, hot air blows into an energy-converter here, which makes hot water. 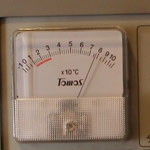 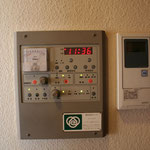 ---One of the air outlets

The thermometer shows 21 degrees Centigrade at around 11:30 am  on November 20, 2012, after heating the concrete base under the floor.

If you are interested to know more about the passive solar heating system, here is the web site of its promoter, OM Solar Company: http://omsolar.jp (available only in Japanese).