Shinmeiwa US-2, a rescue flying boat 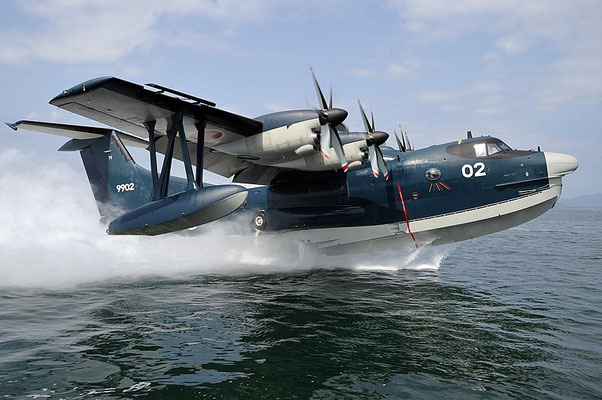 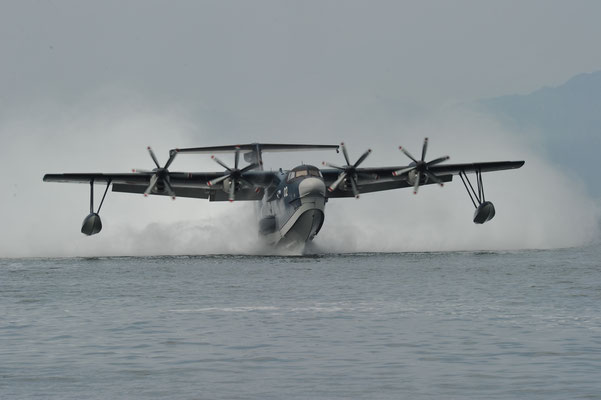 （The photos from the Japan Maritime Self-Defense Force）

First flown in 2003, the Japan Maritime Self-Defense Force operates seven US-2s for the purpose of sea and land rescue operations. The US-2 is powered by four Rolls-Royce turbo prop engines. It is unique in that it can land on the sea with waves up to 3 meters high by means of STOL (short take-off and landing) capabilities. Can you believe that its minimum landing speed is merely 90 kmph? The US-2 is the successor of the US-1, 20 machines of which were built and subsequently retired by 2017. During rescue operations from 1976 to 2017, the US-1 made 768 missions to and from remote islands and 141 missions at sea, in total rescuing 827 people. Because landing and taking-off on the sea renders difficulties and danger on many occasions, two US-1s were lost in accidents.

Shinmeiwa has been in the manufacturing of sea boats since 1928 when it was established as Kawanishi Aircraft Company. At first the company made

sea boats under the technical assistance from Short Brothers of the UK. During WWII, Kawanishi provided sea boats and fighters to the Japanese navy. When the war ended in 1945, Kawanishi became Shinmeiwa. Today, Shinmeiwa manufactures, besides the US-2, aircraft components for Boeing and Airbus.

Shinmeiwa is endeavoring to export the US-2, which is definitely the best flying boat in the world, for example to India, but the major obstacle seems to be the high cost of around US 100 million dollars per machine!  Shinmeiwa explains that this is due largely to the purchasing process of its customer, the Japan Maritime Self-Defense Force: only one machine at a time.