The China Clipper, a luxurious flying boat in the late 1930s.

Have you ever heard of the China Clipper? It was a regular luxurious passenger flying boat from San Francisco to Manila (then an American colony) and back, operated by Pan American Airways for a limited period from 1936 to the outbreak of WWII. The actual flight made stop-overs at Honolulu, Midway Island, Wake Island and Guam for refueling and overnight stay; usually it took 6 days from San Francisco to Manila.

The China Clipper was served by the Martin M130 flying boat: a four-engine plane with a maximum speed of 290 kmph, a cruising speed of 209kmph and a 5,150km range. Large flying boats were best suited for an intercontinental flight at that time, simply because they could land on the sea (actually in bays where waves happened to be more hospitable for flying boats).

The China Clipper (actually this name was applied to a group of three M130s) was a luxury “flying hotel” with sleeping accommodations, a dining room and leisure facilities as well as usual aircraft seating. How expensive was its airfare? The price of a return air ticket from San Francisco to Honolulu was $US 1,700 (equivalent to $US 30,000 in 2019). Doesn’t the China Clipper sound rather exotic and romantic, if not nostalgic? In fact, there was a Hollywood film entitled “China Clipper”, a 1936 film starring Humphry Bogart as a pilot.

The fleet of the China Clipper M130s was soon augmented by larger flying boats called Boeing 314: the whole fleet eventually became three M130s and 12 Boeing 314s serving both Pacific and South American routes. The flight to Manila was extended to Hong Kong.

Unfortunately, WWll in the Pacific theater caused the discontinuation of the China Clipper service. During the war, the China Clipper flying boats were all used by the US navy for transporting cargo and military personnel. It turned out that after the war large passenger flying boats were no longer in demand as land-based aircraft had managed to dominate the sky, carrying more passengers and cargo with longer range. 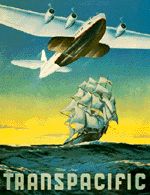 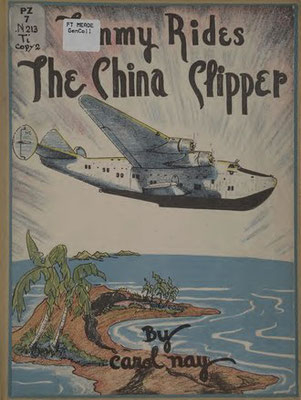 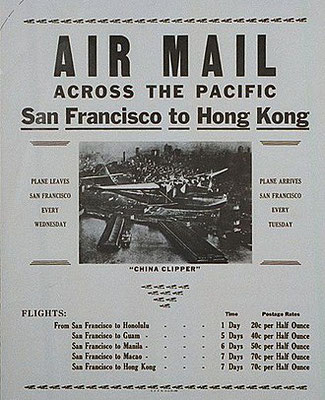