I met him at the IT Training Center, located in the University of the Philippines, in November 2006. At that time, he led a delegation of Japanese businessmen. He gave me two calling cards, one for “Honorary Consul-General of Japan in Baguio”, and another for “President, Federation of Nikkeijin-kai Philippines”.

He was a successful second generation Japanese-Filipino, deriving his riches from mango and mahogany plantations that he ran. His warm and affectionate personality charmed everybody who met him but hid the tragic war time history of his family.

He was born in 1930 in Baguio, the summer capital of the then American administration, as a third child of a Japanese father

and a Filipino mother. His father had migrated to the Philippines as an apprentice carpenter and then became a general contractor.

His happy family life was mercilessly wiped out during the last year of World War II. In a desperate evacuation to the northern part of Luzon with the retreating Japanese army, his mother and some siblings died. Ironically, his elder brother was executed by Japanese soldiers on the premise of being a spy, while another brother was killed by the Filipino guerillas. (Incidentally, his father died of natural causes in 1941)

When the war ended in the summer of 1945, the hardship lingered on. Being the only surviving family members, Carlos and his younger sister were sent to Japan as “enemy aliens”. They lived in Japan as stateless persons. Carlos managed to go back to the Philippines in 1952 after he had gotten his Filipino citizenship. His sister joined him a few years later.

Here are photos of Baguio. 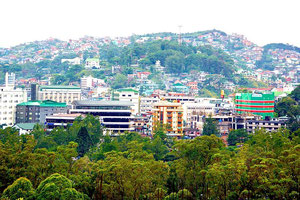 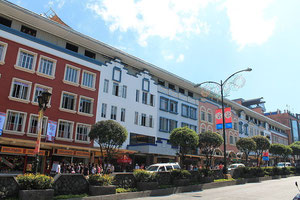