The most gender parity country in Asia

The Philippines has been the most gender parity country in Asia according to the World Economic Forum’s Global Gender Gap report 2021: the 17th in the world (it was the 8th in 2018), ahead of the UK being 23rd, Canada 24th, Denmark 29th and so on. Incidentally, Japan stands abysmally low being the 120th. Perhaps a good reference if not the best is this, there were two female presidents in the Philippines: Corazon “Cory” Aquino (11th president 1986-1992) and Gloria Macapagal-Arroyo “GMA” (14th 2001-2010). It is interesting to note that the two assumed the top tenures by virtue of “people power revolution.” Let’s take a glimpse of how they became presidents and how they fared.

Corazon “Cory” Aquino (1933-2009) came from a wealthy Chinese Filipino family. She married a Pilipino politician, Benigno Aquino Jr. (a Senator then governor of Tarlac). Aquino was later forced to live outside his country because he staunchly opposed Ferdinand Marcos, a dictator. In 1986 he decided to come back to his country, but upon his arrival at Manila international airport he was assassinated. This led to an outcry of people culminating in the so called people power revolution, demanding the ousting of Marcos. As a result, Marcos took  refuge in Hawaii and Benigno Aquino’s wife, Corazon Aquino became president with overwhelming support from the people.

During her presidency, Aquino embarked on reforming the nation in such a way to make the country democratic, prosperous and bring equality to the masses. In particular, Marcos' era constitution of 1973 was abolished and a new constitution was promulgated in 1987 to reflect her policy. The Comprehensive Agrarian Reform Act was enforced in 1988 to distribute farm lands to tenant-farmers. The Local Government Code was put into effect in 1991, transferring much of the national power to local entities where appropriate. Regarding economic policies, Aquino enacted a number of acts focusing on creating a free market. Also noteworthy to mention was Aquino’s effort to resolve the Moro conflict in Mindanao, resulting in the creation of the Autonomous Region in Muslim Mindanao. In 1991, Mt. Pinatubo, which is 87 km northwest of Manila, exploded with such magnitude that it caused severe havoc to the country, including two US bases: Naval Base Subic Bay and Clark Air Base. The US abandoned these bases for good. 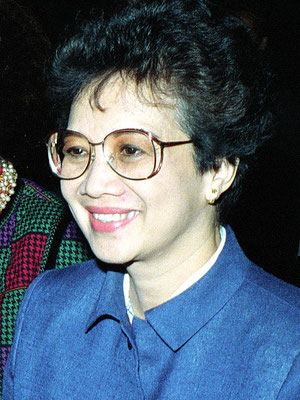 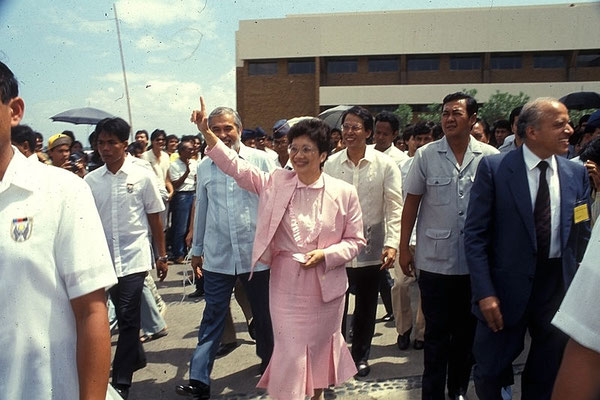 Aquino was succeeded by Fidel Ramos, who was chief of staff under Marcos but who had taken a decisive stance against him during the critical moment of the people power revolution. Aquino’s son, Benigno Aquino III became president from 2010 to 2016. It must be mentioned that Aquino faced a labor dispute in a family-owned plantation due to the “defects” or limitations of the high-profile Agrarian Act of 1988. Having said that Aquino’s legacy lives on as “the mother of democracy” in the Philippines.

Nine years after the end of Aquino’s presidency, another female in the name of Gloria Macapagal-Arroyo or GMA (1947~), who had been vice president, became president in 2001 as a result of the impeachment of incumbent actor-turned president, Joseph Estrada on corruption charges. Once again, people power played an important part in the impeachment process. Arroyo happens to be a daughter of former president Diosdado Macapagal (in office from 1961 to 1965). She was an economist teaching at university (among her students was Benigno Aquino III), when Aquino appointed Arroyo as assistant secretary to the Department of Trade and Industry in 1987 (two years later she became its undersecretary). Arroyo became vice president in 1998 after serving as a senator.

During her presidency, Arroyo grappled with domestic, international and economic issues. Arroyo focused eagerly on economic matters. VAT was introduced in 2005 strengthening the nation’s fiscal standing and therefore stronger pesos, the national currency. She facilitated ways and means for overseas Filipino workers (4 to 5 million) who made large remittances at home. The country saw a growing business process outsourcing industry. Arroyo was credited for keeping a higher economic GDP growth of 4.5% per annum during her years, in fact higher than those attained by her predecessors.

But she was half way through dealing with issues regarding lower per capita income (as a result of higher population growth), and uneven distribution of income. There were negative sides against Arroyo’s effort ranging from election mugging claims to corruption charges: mutiny in 2003, a state of emergency in 2006 after a plot to overthrow the government. Arroyo was succeeded by Benigno Aquino III. She was the House Speaker from 2018 to 2019. So, “Arroyo is the only person to hold three of the highest offices in the Philippines: vice president, president, house speaker.”

We have seen two remarkable female presidents in the Philippines. They both tackled difficult and tumultuous hurdles. They did their best. They derived their power and resolve not from their upbringings but from the people’s power. Mabuhay!