On every Sunday evening, a popular drama on NHK (a national TV station something akin to BBC) features a Japanese historical figure. This runs for a whole year and in 1978, it was the story of a Japanese merchant commonly known as “Luzon Suke-Zaemon”. As his name implies, he was a merchant who engaged in a lucrative but highly risky trade with Luzon, in the Philippines.

A bronze statue of Luzon Suke-Zaemon, which is located in Sakai city where he was born.

From here, let’s go through the life of Suke-Zaemon. He is thought to have been born in 1565 and became a merchant in Sakai, very close to today’s Osaka city. Sakai at that time was remarkable in that it was administered by a group of influential merchants, very much akin to Venice at its heyday. Japan was then undergoing a tumultuous period called “the age of wars” between the fall of the Muromachi Shogunate in 1573, and the start of the Tokugawa Shogunate in 1603. It was said that through the art of tea ceremony, Suke-Zaemon became acquainted with almighty Hideyoshi, who managed to control the nation north to south. This helped Suke-Zaemon to forge his wealth by supplying money and providing logistical services for Hideyoshi’s soldiers. His fortune did not last long as he suddenly lost the patronage of Hideyoshi for some reason and he had to leave Japan to seek a new life in Luzon. There are no records as to what happened to him thereafter.

Now turning to the TV drama, Suke-Zaemon was depicted as a junior merchant on board a ship bound for Okinawa but a shipwreck brought him to the Bataan Islands, which are located between Taiwan and Luzon. The drama went on to show that Suke-Zaemon and his men were caught by a local tribe, who had suffered greatly from the wrongdoings of “Wokou,” Japanese pirates. After a while, they managed to be released and became friendly with the local people. From there his trading activities with Luzon started. Let’s delve into the history of trading between the two countries then.

It is interesting to know that although the Tokugawa Shogunate effected an isolationist foreign policy for nearly three centuries, it was the same Shogunate that was interested in foreign trade at its early decades. In order to regulate foreign trade, the ruler issued certificates or “red sealed letters” to those eligible to carry out trade with Asian countries. From 1603 to 1633, more than 350 certified ships sailed to different destinations in East Asia, including about 50 to Manila, Luzon. Those ships sailed from and came back to Nagasaki. What goods were traded? Surprisingly enough, goods from Luzon were mainly Chinese raw silk and silk wares among others. 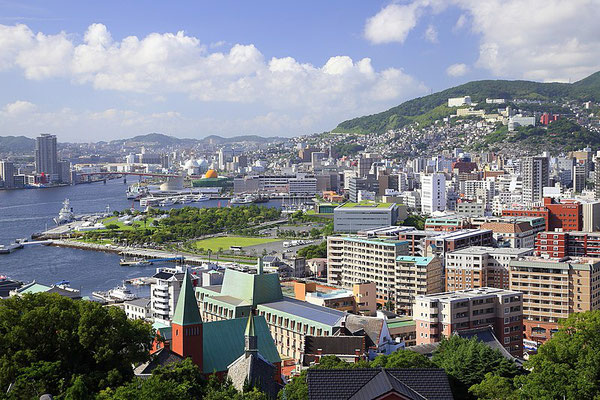 Did you know that at that time, Ming China banned all direct trade with Japan because of the past Wokou raids and the Japanese invasion of Korea? This political situation did not deter Chinese merchants from bringing these silk goods to Manila to be sold to Japanese merchants for silver, bronze, sulfur and swords in return. Incidentally, Chinese silks were far more superior in quality to those made in Japan.

Some information about the certified ships; initially they were similar to Chinese junks but later on Galleon ship designs were widely adopted. The ships weighed from 500 to 750 tons and usually carried around 200 sailors and passengers. Sailors, especially navigators, happened to be Chinese, Portuguese, Spanish, Dutch or Englishmen, all experienced professionals.

Now let’s turn to Luzon, which had just become a Spanish colony. What goods were shipped to Spain? Again, the goods were mainly Chinese goods, silk fabrics, porcelain, ivory, lacquer ware and of course spices. These goods travelled from Manila to Acapulco, western Mexico (Manila-Acapulco galleon trade), then overland to Veracruz on the eastern coast, and finally sailed to Spain. The Spaniards paid silver ingots to the Chinese merchants.

What triggered the Tokugawa Shogunate to discontinue this certified trade? First and foremost, it was related to Japan’s decision to prohibit the practice of Christianity altogether. There were decrees one after another to that effect. In order to further enforce it, the Shogunate discontinued all trade and the exchange of culture with other countries, with the exception of China, Korea and interestingly enough the Netherlands, which was a non-Catholic country. With this, a number of Japanese towns in East Asia disintegrated over time, including the one in Manila with a population of 2,000 at its peak.

As mentioned, we have no information as to what happened to Suke-Zaemon after he left Japan. A rumor said that he went to Cambodia from Manila and lived there with some success.