The Genji-monogatari or the Tale of Genji, a love story written in the early 11th Century by a court lady.

The Genji-monogatari depicts a royal man (imaginary) who is both talented and attractive, who managed to climb the ranks becoming a powerful court minister. It also highlights his love affairs here and there, of course. Then there is the sad story of his decline, which subsequently leads him to become a Buddhist monk and finally followed by his demise. Doesn’t this sound somewhat familiar even with today’s love stories? Let’s take a closer look at this remarkable story.

It was the time of the Heian Period (from the 9th to 11th Centuries), which was ruled by emperors with their courts and featured a court culture of its own. With this background, the Genji-monogatari was written by Murasaki-Shikibu (circa 970~978 to 1019). She was raised in a lower court official’s family and started her stint as a tutor to a noble’s daughter. She became a court lady and managed to write the book in Katakana, phonograms derived from cursive Chinese characters. Incidentally, phonograms were used by both men and women especially in writing poems at that time. The Genji-monogatari is a long story not only covering the life of the main character but also those of his offspring; it also includes more than 800 poems.

Murasaki-Shikibu, a painting by an artist in the 17th Century 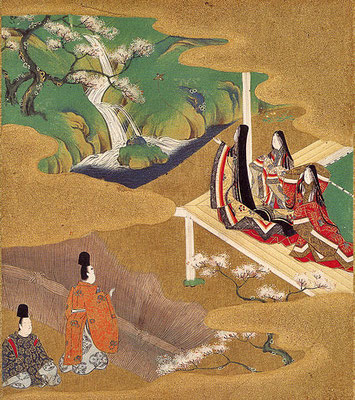 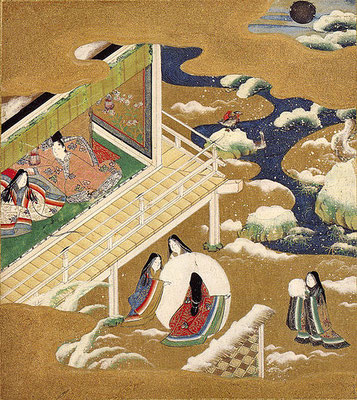 Depicting the scenes from the Genji-monogatari by an artist in the 17th Century.

The original handwritten book does not exist but there are quite a few manuscripts of differing versions. So, efforts have been made to keep the manuscripts in order and alternatively rewritten using current Japanese from time to time. But it took nearly ten centuries before a female writer translated it into modern Japanese. The work was done by Yosano Akiko (1878-1942), who was a poet, writer and women’s advocate. Among her early works, she was noted for a “controversial” song book that entailed women’s self-consciousness and sexual love. The Genji-monogatari has been translated into more than 20 foreign languages.