The idea of rebuilding Edo castle 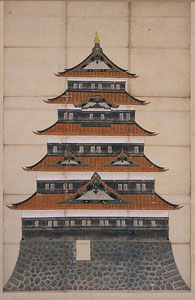 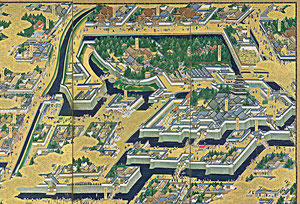 depicting a side view of the Edo castle tower

On the eastern part of the Imperial Palace in Tokyo, there is a beautiful and well-kept park called “Higasi Gyoen”, which is open to the public. This park stands on the previous site of Edo castle, from which Tokugawa Shoguns resided and governed Japan for nearly three centuries (from the early 17th to the mid 19th century).

As you come closer to the park, castle moats and majestic stone-built mounds will welcome you. After going through a castle gate and walking up some slopes to higher ground, you will reach where the core part of the castle once existed. There a five story castle tower, nearly 60 meters high, used to stand alongside a castle mansion that was large enough to provide living quarters for a shogun as well as an official space for administration. Now only the mounds of the castle tower remain.

Did you know that the castle tower was burnt down three times all occurring in peace time? The last one was in 1657 (incidentally only nine years before the Great Fire of London); a fire started in a densely populated area, spreading fiercely under a strong wind and burning down most of the houses in Edo, including Edo castle. Then, why not a fourth one? The Shogunate at that time, decided to focus on rebuilding the entire city rather than installing another castle tower, which had by then lost its military importance.

There are quite a few castle towers in Japan; but very few castle mansions remain today: the only one I know of is at Kumamoto castle in Kyushu. Edo castle was the venue of events rich in history, often dramatized in plays and novels thus would make a valuable addition to our heritage. To sum up, I look forward to the restoration of Edo castle as a remarkable symbol of Tokyo.

One of the approaches to the core part of Edo castle. I took this photo on March 18, 2012.