Ogata was the first Japanese, the first female, also the first academic to be appointed the UNHCR from 1991 to 2000 during the turbulent years of crises concerning the Kurdish refugees after the Gulf War, refugees from the Yugoslav wars, refugees of the Rwandan genocide and more. It is without doubt that Ogata became the UNHCR reflecting the economic and international clout of Japan at the time. What were her credentials for the UN job?

Soon after Ogata became the UNHCR in 1991.

Ogata was born in Tokyo to a Japanese diplomat father, so in her childhood she went to various countries for her father’s postings: San Francisco, China, Hong Kong and more. Incidentally, her great-grandfather, Inukai Tsuyoshi, a Japanese prime minister, was assassinated in 1932 in a coup d’état. After obtaining her PhD in Politics from the University of California (Berkley), she started teaching and doing research at universities in Japan. From there Ogata’s official work on behalf of the Japanese government especially at the UN took place intermittently with her academic activities. From 1978 to 1979, Ogata was Envoy Extraordinary and Minister Plenipotential for the permanent mission of Japan to the UN and Chair of the UNICEF Executive Board. Ogata was Dean of the Faculty of Foreign Studies at Sophia University just before becoming the UNHCR.

At the UNHCR, Ogata "implemented effective strategies and helped countless refugees escape from despair." In the face of Kurdish refugees at the border between Turkey and Iraq, Ogata expanded the mandate of UNHCR to include the protection of internally displaced persons.” At the siege of Sarajevo, Ogata took an initiative to carry out airlift operation in close cooperation with some European air forces. Here is a speech by Ogata at her Liberty Medal acceptance speech on July 4, 1995. “If we ignore the plight of the refugees or the burden of the countries which have received them, I fear we will pay a heavy toll in renewed violence, conditions must be created urgently to allow the refugees to go back and live in peace and tolerance in their own country.” Incidentally, there was an occasion for Japan to participate in a humanitarian operation for Rwandan refugees. Under a request from UNHCR, Japan sent its Self Defense Force personnel for medical and water supply operations for Gama and air transportation operation with C130 transport planes. 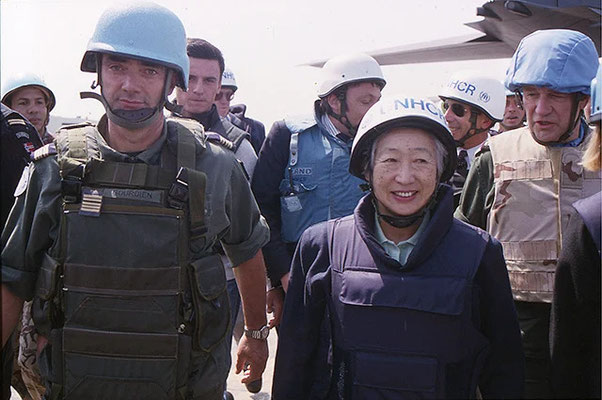 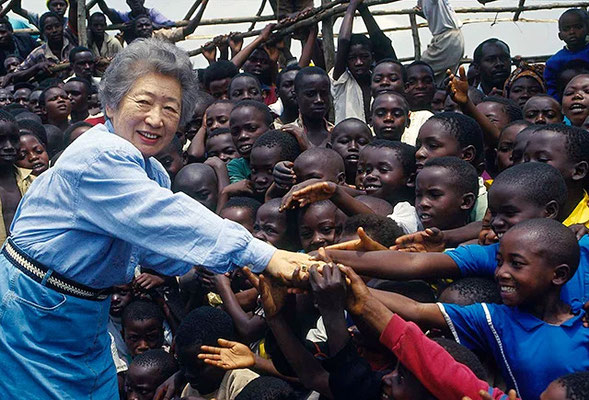 After being the UNHCR, Ogata became the president of Japan International Cooperation Agency (JICA) from 2003 to 2013. JICA is responsible for carrying out Japan's official development assistance. During her tenure, she focused on peace-building projects in Afghanistan and Mindanao, the Philippines in line with her strong desire for achieving human security.

Do you know the latest statistics related to refugees according to UNHCR?

Lastly, I would like to refer to a BBC obituary for Ogata Sadako dated October 29, 2019 as follows; “First female United Nations Refugee Chief and 5-foot giant dies.” This perhaps best explains Ogata and her endeavor.